Two Screenings at 3:30pm and 6:30pm
All dialog in films from non-English speaking countries will be presented in its original language accompanied by English subtitles

2020 Academy Awards®  Best International Feature Film - Official Selection of Colombia
MONOS, Alejandro Landes’ awe-inspiring third feature, is a breathtaking survivalist saga set on a remote mountain in Latin America. The film tracks a young group of soldiers and rebels -- bearing names like Rambo, Smurf, Bigfoot, Wolf and Boom-Boom -- who keep watch over an American hostage, Doctora (Julianne Nicholson). The teenage commandos perform military training exercises by day and indulge in youthful hedonism by night, an unconventional family bound together under a shadowy force known only as The Organization. After an ambush drives the squadron into the jungle, both the mission and the intricate bonds between the group begin to disintegrate. Order descends into chaos and within MONOS the strong begin to prey on the weak in this vivid, cautionary fever-dream.

2020 Academy Awards®  Best International Feature Film - Official Selection of Luxemborg
Israel / Palestine, today. Salam, a charming 30-year-old Palestinian living in Jerusalem, works as a trainee on the Palestinian popular soap opera "Tel Aviv on Fire", produced in Ramallah. Every day, to reach the TV studios, Salam has to go through a rather difficult Israeli checkpoint. There he meets the commander of the checkpoint, Assi, whose wife is a big fan of the soap opera. In order to please him, Assi puts pressure on Salam to change the end of the show. Salam quickly realizes that Assi's ideas could be promoted to him as a screenwriter. Salam's creative career is suddenly boiling, until Assi and the soap opera producers and financiers disagree on how it should end. Stuck between an army colonel and Arab support, Salam can solve his problems with a final master stroke.
Film Sponsor:  Barbara Meister 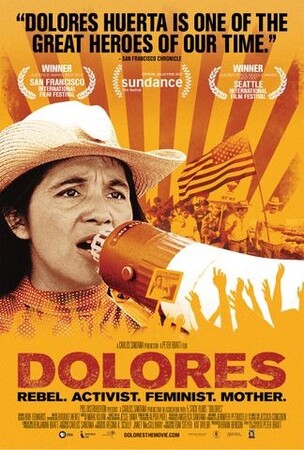 In partnership with the Museum of Ventura County

Dolores Huerta is among the most important, yet least known, activists in American history. An equal partner in co-founding the first farm workers unions with Cesar Chavez, her enormous contributions have gone largely unrecognized. Dolores tirelessly led the fight for racial and labor justice alongside Chavez, becoming one of the most defiant feminists of the twentieth century-and she continues the fight to this day, at 87. With intimate and unprecedented access to this intensely private mother to eleven, the film reveals the raw, personal stakes involved in committing one's life to social change. Directed by Peter Bratt.

The Museum of Ventura County is excited to be co-sponsor with the Oxnard Film Society in a special screening of Dolores on March 9, 2020 at 3:30 and 6:30 PM at the Plaza Cinemas 14 in downtown Oxnard.
This screening is in collaboration with the Museum’s upcoming exhibit:  Huelga! Photographs from the Frontlines by Jorge Corralejo will be on display from March 14, 2020—April 26, 2020 at the Museum of Ventura County and from March 20, 2020-August 2, 2020 the Agriculture Museum in Santa Paula. An opening reception will be held in Ventura on Saturday, March 14 from 2:00-4:00 PM. The cost to attend is $0 for members and $5 for nonmembers.
Jorge Corralejo, a longtime local activist and civic leader, displays his collection of photography and archives of work at both the Museum of Ventura County and the Agriculture Museum in Santa Paula for this special two-location exhibit. A photography exhibit from the 1970’s labor strikes featured along with memorabilia from the collection of longtime local activist and civic leader, Jorge Corralejo.  We learn about his time with United Farm Workers, working alongside Cesar Chavez and Dolores Huerta from the Boston A & P strikes to the streets of Oxnard.

On March 19, 2020 the Museum will be honored to host Dolores Huerta for a talk about her years working with the UFW, her work building community and organizing for change. The talk will take place in the Smith Pavilion at 6:30 PM with an opportunity to tour the Huelga exhibit both before and after the talk. The cost to attend the talk is $5 for members and $15 for non-members. To purchase tickets please go to:
http://weblink.donorperfect.com/Huerta

2020 Academy Awards®  Best International Feature Film - Official Selection of Russia
In post-WWII Leningrad, two women, Iya and Masha (astonishing newcomers Viktoria Miroshnichenko and Vasilisa Perelygina), intensely bonded after fighting side by side as anti-aircraft gunners, attempt to readjust to a haunted world. As the film begins, Iya, long and slender and towering over everyone-hence the film's title-works as a nurse in a shell-shocked hospital, presiding over traumatized soldiers. A shocking accident brings them closer and also seals their fates. The 28-year-old Russian director Kantemir Balagov won Un Certain Regard's Best Director prize at this year's Cannes Film Festival for this richly burnished, occasionally harrowing rendering of the persistent scars of war.

François Ozon's gripping drama follows three men who band together to dismantle the code of silence that continues to protect a priest who abused them decades ago. Based on events from the 2019 conviction of Cardinal Philippe Barbarin of Lyon for concealing the conduct of Father Bernard Preynat, BY THE GRACE OF GOD compassionately illustrates the varying effects of trauma on survivors and their families in this urgent portrait of resistance, the power of mobilization, and the mysteries of faith.

April 6
Those Who Remained
(Akik Maradtak)


2020 Academy Awards®  Best International Feature Film - Official Selection of Hungary
Having survived the camps, 42-year old Aldo lives a solitary life as a doctor in Budapest. 16-year old Klara lives reluctantly with her great-aunt, holding on to hope that her father and mother will return. She meets Aldo, and soon the two of them find something in each other that has long been absent in their lives. As they grow closer and closer, the joy in both of their lives slowly returns. But as the Soviet Empire rises to power in Hungary, their pure and loving father-daughter relationship is misunderstood and frowned upon. A lyrical story of the healing power of love in the midst of conflict, loss and trauma, Those Who Remained ....

2020 Academy Awards®  Best International Feature Film - Official Selection of Poland
After spending years in a Warsaw prison for a violent crime, 20-year-old Daniel is released and sent to a remote village to work as a manual laborer. The job is designed to keep the ex-con busy, but Daniel has a higher calling. Over the course of his incarceration he has found Christ, and aspires to join the clergy - but his criminal record means no seminary will accept him. When Daniel arrives in town, one quick lie allows him to be mistaken for the town’s new priest, and he sets about leading his newfound flock. Though he has no training, his passion and charisma inspire the community. At the same time, his unconventional sermons and unpriestly behavior raise suspicions among some of the townsfolk - even more so as he edges towards a dark secret that the community hasn't revealed in the confessional booth.
Executive Director:  George J. Sandoval  Info at:   geosand47@gmail.com  -   805.798.0830
See you at the movies!