Celebrating Our 15th Year
All dialog in films from non-English speaking countries will be presented in its original language accompanied by English subtitles
This Monday we present one of the best British films of recent years - THE SOUVENIR.  We are presenting films in a safe environment and will now allow 100 patrons each screening.  But if you are person 101 you will not be turned away! Remember our capacity is 234 seats so it is safe and roomy.
As of Sept 29 the Ventura County Public Health Extends Health Order Requiring Masks Indoors Until Oct 19, 2021.
Our Monday Night Foreign Film Series screens two films each month, the first and third Mondays at 3:30pm and 6:30pm at Plaza Cinemas 14.    In our Virtual Cinema library we are streaming two films:  Los Hermanos (USA) and Hope (Norway).
We will continue our mission of providing the best of world cinema to our film lovers on Mondays and via Virtual Cinema.
Thanks and Be Safe, George J. Sandoval, Executive Director
Plaza Cinemas 14, 255 West 5th Street, Oxnard CA 93030
General Admission:  $10.75
Seniors/Children: 7.50
Monday, October 18th at 3:30pm and 6:30pm

FILM SPONSOR:  JANE AND DENNY DWIRE
A shy but ambitious film student (Honor Swinton Byrne) begins to find her voice as an artist while navigating a turbulent courtship with a charismatic but untrustworthy man (Tom Burke). She defies her protective mother (Tilda Swinton) and concerned friends as she slips deeper and deeper into an intense, emotionally fraught relationship that comes dangerously close to destroying her dreams. From acclaimed writer-director Joanna Hogg comes an enigmatic and personal portrait of the artist as a young woman, combining passionate emotions and exquisite aesthetics into a lush, dreamlike story of young adulthood and first love. At once enrapturing and mysteriously unsettling—and featuring a profoundly layered breakout performance by Honor Swinton Byrne--The Souvenir is an essential and enduring film from one of our most distinctive and exciting filmmakers.
Monday, November 1st at 3:30pm and 6:30pm 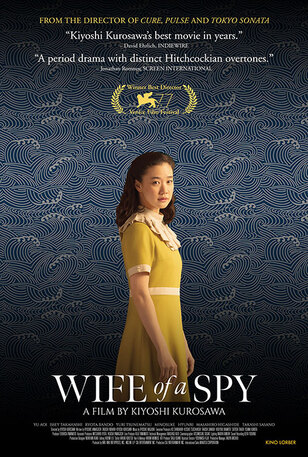 WIFE OF A SPY

Master filmmaker Kiyoshi Kurosawa (Pulse, Cure, Tokyo Sonata) won the Silver Lion (Best Director) at the Venice Film Festival for this riveting, gorgeously crafted, old-school Hitchockian thriller shot in stunning 8K. The year is 1940 in Kobe, on the eve of the outbreak of World War II. Local merchant and amateur filmmaker Yusaku (Issey Takahashi, Kill Bill) senses that things are headed in an unsettling direction. Following a trip to Manchuria, he becomes determined to bring to light the things he witnessed there, and secretly filmed. Meanwhile, his wife Satoko (Japan Society’s 2021 Honoree Yû Aoi) receives a visit from her childhood friend, now a military policeman. He warns her about Yusaku’s seditious ways and reveals that a woman her husband brought back from his trip has died. Satoko confronts Yusaku, but when she discovers his true intentions, she is torn between loyalty to her husband, the life they have built, and the country they call home.
Monday, November 15th at 3:30pm and 6:30pm

A remarkably assured debut from Swiss director Andreas Fontana, Azor invites us into the alluring world of the ultra-wealthy in 1980s Argentina. With the country in the clutches of a military dictatorship, violence is always simmering just under the surface. Atmospheric and slyly seductive, this sophisticated political thriller teems with exquisite scenery and ominous conversation.

Set in Buenos Aires, the film follows private banker Yvan (Fabrizio Rongione, Two Days, One Night) as he arrives from Geneva with his wife Ines (Stéphanie Cléau) to replace a mysteriously missing colleague and placate their moneyed clientele. Moving through the smoke-filled lounges and lush gardens of a society under intense surveillance, he finds himself untangling a sinister web of colonialism, high finance, and a nation's “Dirty War”.

A highlight from this year’s Berlinale and New Directors/New Films, Azor evocatively depicts the uneasy interplay between wealth and power. Written in collaboration with Argentinian filmmaker Mariano Llinás (La Flor), this is a riveting look at international intrigue worthy of John le Carré or Graham Greene.
We'd like to thank the Port of Hueneme for becoming a 2021 Annual Sponsor of the Oxnard Film Society.
VIRTUAL CINEMA

Two Cuban-born brothers, both virtuoso musicians – Aldo and Ilmar López-Gavilán – live on opposite sides of the geopolitical chasm that separates the U.S. and Cuba. But although they lead very different existences, the brothers have an instinctual connection.
Following their parallel lives in New York and Havana, Los Hermanos / The Brothers offers an amazingly heartfelt – though often startling – view of estranged nations through the lens of music and family. In capturing their momentous reunion and electrifying first performances together, the film shows how family bonds can transcend politics.
Featuring an electrifying, genre-bending score composed by Aldo and performed with his brother, Ilmar, and with guest appearances by maestro Joshua Bell and the Harlem Quartet.

Norway’s official selection to the 93rd Academy Awards for the Best International Feature
ANJA lives with TOMAS in a large family of biological children and stepchildren. For a number of years the two adults have grown independent of each other, with creative jobs in parallel worlds. When Anja gets a terminal cancer diagnosis, their modern life breaks down and exposes neglected love. Alone with her grief and her fears, Anja realizes that she needs Tomas' full help and support. It's their only chance. How else will their children find the strength once she is gone, if their parents are unable to weather the storm together? Anja and Tomas are thrown into a crash course in mutual trust, and eventually a joint struggle, to deal with this unexpected and premature death. By getting to know each other anew, they unconsciously become principal characters in a love story, finally learning to truly love each other after a long life spent together.

Click on Link:  https://kimstimvirtual.vhx.tv/products/hope-oxnard-film-society
Would you like to receive our weekly updates?
Executive Director:  George J. Sandoval  Info at:   geosand47@gmail.com  -   805.798.0830
See you at the movies!