Celebrating Our 16th Year
All dialog in films from non-English speaking countries will be presented in its original language accompanied by English subtitles
Every October over 90 countries submit a film to the 2023 Academy Awards for the Best International Film Award category.
In December, we will be screening two submissions:  from Colombia, MEMORIES OF MY FATHER, a family drama from Oscar winning director, Fernando Trueba and Poland's official submission, EO, from legendary director Jerzy Skolimowski.
Our Monday Night Foreign Film Series usually screens two films each month, the first and third Mondays at 3:30pm and 6:30pm at Plaza Cinemas 14.   We will continue our mission of providing the Best of World Cinema to film lovers on Mondays in downtown Oxnard along with supporting local filmmakers   Thanks and Be Safe, George J. Sandoval, Executive Director
Plaza Cinemas 14, 255 West 5th Street, Oxnard CA 93030
General Admission:  $11.25
Seniors/Children: $8
We'd like to thank the Port of Hueneme for becoming
a 2022-2023 Annual Sponsor of the Oxnard Film Society.
Monday, December  5th  at 3:30pm and 6:30pm

Memories of My Father

Columbia's official submission to the 2023 Academy Awards.
Based on the eponymous book Oblivion. A Memoir, this film is about a good man, Héctor Abad Gómez, a prominent doctor and human rights activist in the polarized and violent Medellín of the 70s. The story tells of the life of the doctor, a father who is concerned about both his children and children from less favored classes. The setting is the house, where you breathe an air of vitality and creativity characteristic of education based on tolerance and love.Nothing suggests that terrible cancer will end the life of one of his daughters.  Sadness and rage at the loss of an exceptional being will lead Hector to give himself, with all his soul, to the cause of opening his eyes to an intolerant society that not only does not listen to him but will persecute him to silence him. This an intimate story that we see from the eyes of a father’s only son, Héctor Abad Faciolince, one of the most outstanding writers in contemporary Colombia.
Monday, December 19th at 3:30pm and 6:30pm

Poland's official submission to the 2023 Academy Awards.
With his first film in seven years, legendary director Jerzy Skolimowski (Deep End, Moonlighting) directs one of his most free and visually inventive films yet, following the travels of a nomadic gray donkey named EO. After being removed from the traveling circus, which is the only life he’s ever known, EO begins a trek across the Polish and Italian countryside, experiencing cruelty and kindness in equal measure, all the while observing the follies and triumphs of humankind. During his travels, EO is both helped and hindered by a cast of characters including a young Italian priest (Lorenzo Zurzolo), a Countess (Isabelle Huppert), and a rowdy Polish soccer team. Loosely inspired by Robert Bresson’s Au hasard Balthazar, and featuring immersive, stunning cinematography by Michal Dymek coupled with Pawel Mykietyn’s resonant score, Skolimowski’s film puts the viewer in the perspective of its four-legged protagonist. EO’s journey speaks to the world around us, an equine hero boldly pointing out societal ills, and serving as warning to the dangers of neglect and inaction, all while on a quest for freedom.
Monday, January 9th at 3:30pm and 6:30pm 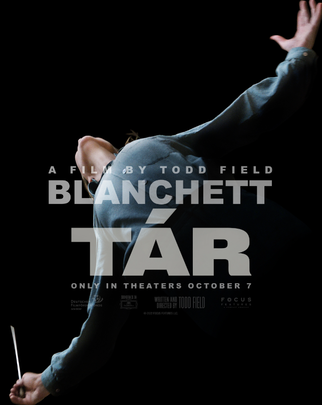 From writer-producer-director Todd Field comes TÁR, starring Cate Blanchett as Lydia Tár, the groundbreaking conductor of a major German Orchestra. We meet Tár at the height of her career, as she's preparing both a book launch and much-anticipated live performance of Mahler's Fifth Symphony. Over the ensuing weeks her life begins to unravel in a singularly modern way. The result is a searing examination of power, and its impact and durability in today's society.
Monday, January 23rd at 3:30pm and 6:30pm

In Ruben Östlund's wickedly funny Palme d'Or winner, social hierarchy is turned upside down, revealing the tawdry relationship between power and beauty. Celebrity model couple, Carl (Harris Dickinson) and Yaya (Charlbi Dean), are invited on a luxury cruise for the uber-rich, helmed by an unhinged boat captain (Woody Harrelson). What first appeared instagrammable ends catastrophically, leaving the survivors stranded on a desert island and fighting for survival.
Would you like to receive our weekly updates?
Executive Director:  George J. Sandoval  Info at:   geosand47@gmail.com  -   805.798.0830
See you at the movies!